The story of the Guitar Hero 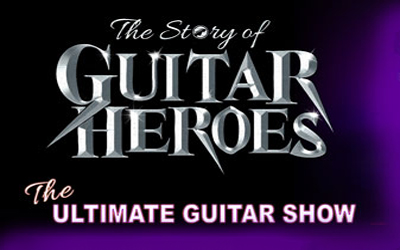 Ahead of their highly anticipated show at Bournemouth Pavilion Theatre, Phil Walker, guitar virtuoso shares the history of the show. This show’s extraordinarily talented band uses over 30 guitars to recreate and accurately reproduce the sound and ambience of each guitar hero. Featuring video footage of historical moments, with state-of-the art lighting and delivered with a light hearted vibe – this makes for a truly sensational and enjoyable evening. Now in its 5th year, The Story of Guitar Heroes has become increasingly popular not only with many guitar p

How did you come to think of ‘The Story of Guitar Heroes’?

“It was one of those events in life where a couple of things just happened to line up perfectly and the idea comes together, and you realise this is where your life has been leading you to.
I got in from a gig late one night and was winding down watching a BBC show called Guitar Heroes. It got me thinking how amazing it would be to see all these people in one live concert – which obviously isn’t possible as many are no longer with us. I was thinking wouldn’t it be great to capture the sound and ambience of these guitar heroes in one live show. Over the years I’ve accumulated a vast guitar collection – aside from it having been my day job, I am also self-confessed guitar fanatic and addict. And it just seemed this little nugget of a concept was a great chance (excuse!) to put them all on stage and to play each one in the way they were meant to be seen.”

Which Heroes have you chosen to portray in the show?

“I wanted it to be a show with something for everyone, but also to really pay tribute to the journey that the guitar has taken. As you can probably tell it’s an area I’ve been interested in most of my life and I have a huge bank of interesting information, facts, figures, experience and sounds that, until the show, really sat in my head. So I wanted to pull all of that together too, so that even the most die-hard music historians would enjoy it and take something away with them. So I start very early on in the history of the guitar with people like Chuck Berry, Eddie Cochren, The Shadows, Jimi Hendrix and we work our way up to more modern players like Brian May and Steve Vai. We also look at a range of guitarists, so it’s not just the rock genre, but we include people like Les Paul, Albert Lee and perhaps people that are less mainstream but who are equally awesome in their talent and contribution to music. ”

How have you been able to create such authentic sounds, aside from years of practice?

“We have amazing technology available to us today, and alongside some original guitars, it’s possible to create very authentic sounds from time gone by. So there are some songs where I use very specialist guitars, and others where I use effects to create original sounds (for example, using delay to capture the sounds of The Shadows) or a particular technique, such as the vibrato arm or harmonics. I even use a six pence as a pick for the Brian May/Queen section, which you will know is what Brian May does. It’s surprising as it makes a real difference to the sound, though it took a while to get used to and even now, I have to really be aware of the change between using that and then going back to a normal pick.”

Who were your guitar idols growing up?

“Without a doubt, Hank Marvin got me started. He piqued my interest and then I found a guy called Albert Lee, and so those two from a young age were a huge influence. Oh and Eddie Cochren of course.”

Who else is performing with you on stage?

“Alongside me on guitar and vocals, there are another two guitarists who are multi-talented and swap between guitar, bass and vocals, and then there’s our amazing drummer! We also feature a couple of our guys from backstage who make special guest appearances on certain songs.”

How many guitars will you be using on stage?

“Then there’s the guitars! They are very much a key part of the show. I use 18 currently, but collectively as a band we have over 30 in the show, most of which sit on the stage and add to the visual experience, together with the technology we use to create authentic sounds showcasing each guitar hero. We constantly add to our collection – all in the name of research of course – so our show is organic and changes as we bring new sounds in, look at different guitar giants and listen to feedback about what the audience would like to see.”

Which guitar is your favourite?

“Without a doubt it has to be the one I’ve had the longest. I’ve had it since I was 11 years old; so it’s very much been a companion on this journey with me to this point in my life. It’s my old white Fender Stratocaster! It travels everywhere with me and rarely leaves my side!”

How long have you been playing guitar?

“I started playing when I was six years old. You’d find me inside listening to music, playing guitar – rather than outside kicking a football around. Not giving my age away, but I’ve only ever played guitar/music – I was self-taught, but it became my day job and only job I’ve ever had. I’m very fortunate to have a path where I can earn a living doing what I love and now this show feels like a culmination of all those parts coming together.

Do you play other instruments or are you solely a guitarist?

“No, the guitar is my first love but as a lover of music (and a working musician), I play several instruments – drums, bass. I do most of the vocals. I also write music, but that tends to be for my own interest rather than public.”